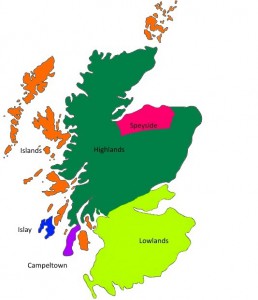 No other country in this world shapes our perceptions about whisky as much as Scotland does down to the present day. So it is no surprise that Scotland with its distinctive Scotch whisky is for most people still the whisky country per se.  However the assignment by regions is more due by traditions and history than by anything else. Whiskies from the same region might even have something like a typical basic nature. But there are in some cases very notable differences between Whiskies from the very same region. As of this writing there are about 100 distilleries in Scotland. More are under construction or planned.

Speyside is a geographical only vague defined region around the second largest river in Scotland, the River Spey. Nowadays there are around 45 distilleries in that area with partway very different whisky styles. The high concentration of distilleries here is mainly due to the largely available and easy to access resources needed for whisky production.  The self-proclaimed “Whisky Capital” of the Speyside is Dufftown with six distilleries. The basic nature of Speyside Whiskies is rather light und sweet with floral flavors.

The territory south of the Highland Line has only three active Single Malt distilleries left (Glenkinchie, Auchentoshan, Bladnoch). Still the region is some aspects still the“secret centre of power” of the whisky industry in Scotland. The considerable number of farms in the Lowlands do not only produce the needed cereals for the whisky production but Scotland most industrialized region has also the most Grain distilleries thus playing a major role in the Blend industry. whisky from the Lowlands is mellow und fresh with flowery or fruity flavors. The reason for this is the triple distillation (the same as in Ireland).

Islay is without a doubt the most prominent whisky producing island in Scotland. Islay is very fertile but rocky in the South. Firewood is only meagerly available compared to peat so peat is way more used in the production. Peat is also the reason why Islay Whisky is so peaty-smoky and full-flavored. Besides that every active distillery there has a very own style. The southern distilleries (Ardbeg, Lagavulin, Laphroaig) are drying their malt with up to 50% peat  and they also use the peat water for every step in the production. The result is a very strong whisky with smoke, tar, iodine and maritime notes.  On the contrary Bruichladdich in the West and Bunnahabhain in the North do not use the peat water and only lightly peated or complete unpeated barley. Therefore their Whiskies are relative mellow and smooth compared with other Whiskies from Islay. Although Coal Ila is also located on the north coast they produce a rather peaty whisky with maritime and floral notes. The whisky from Bowmore on the west coast is smoother but also peated.

All Islands besides Islay which is a whisky region in its own right. However every Island has its very own whisky style so such a broad definition like “Islands whisky” does not do any justice to that noticeable variety. At the moment there are six Islands distilleries located on five different islands.

From the end of the 18th century until the middle of the 19th century Campbeltown on the peninsular Kintrye was the unchallenged whisky Capital of Scotland. At this time there were 34 distilleries of whom 15 did not survive the crisis in the 1850-ties. Another 17 distilleries shut down during the next couple decades because of various reasons. Nowadays there are only three distilleries left (Springbank and the associated Glenglye distillery as well as Glen Scotia). They produce a full-bodied, partly peated whisky with deep aromas.