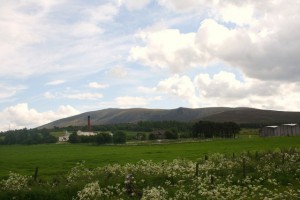 1829: The distillery is destroyed by a flood and John Innes builts a new one in the outbuildings of a farmhouse, a few kilometers away from the old site. He names his distillery Lyne of Ruthrie.

1834: John Innes goes bankrupt. William Smith & Co becomes the new owner. The distillery is given its present name: Benrinnes {ben-RIN-nes}, named after Ben Rinnes as the distillery is situated at the foot of this 840-meter high mountain.

1896: Benrinnes is damaged in a fire. Subsequently, the distillery is not only rebuilt and modernized but also converted to be powered by electricity. In the same year, David Edwards dies and his son Alexander Edwards takes over.  Alexander is a true entrepreneur and the founder of several distilleries: Craigellachie (1891), Aultmore (1896), Dallas Dhu (1898), Oban (1898) and Yorker distillery (1913).

1955: The distillery is extensively renovated.

1964: The floor maltings are replaced by a Saladin box. This is also the end of the farming activities on the site.

1966: Three additional stills are installed, bringing the total to six.

1970: The stills are converted to internal heating.

1984: The distillery stops producing its own malt and removes its Saladin box. The malt needed for production is now purchased centrally.

1991: The first official distillery bottling is released, a 15 Year Old in the Flora & Fauna series.