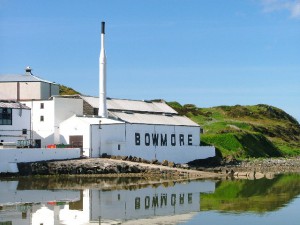 1779: David Simpson founds the Bowmore distillery, which makes it the oldest (legal) Islay distillery as well as one of the oldest distilleries in Scotland, only second to Glenturret. The distillery lies on the South Easterm shore of Loch Indaal and is named after the administrative capital of Islay, the first planned village in Great Britain, founded in 1768. Bowmore {bo-MORE} is Gaelic for “great sea reef”.

1892: The distillery gets refurbished and afterwards sold to Bowmore Distillery Limited, a consortium composed of English businessmen.

1994: Suntory buys the remaining shares of Morrison Bowmore and is now in full control of the company.

Bowmore claims to have the oldest maturation warehouse in Scotland. It is also the only one below sea level. Another uniqueness of the distillery is their public swimming pool, a reconstructed warehouse, that is heated by the waste heat from the distillation process.

Bowmore is also one of the last Scottish whisky distillery which is still malting its own barley. Around 30% of the needed malt is produced directly in the distillery with a phenol level of 25 ppm, the rest comes from the mainland and has the same phenol level. Both parts are always mixed before mashing.