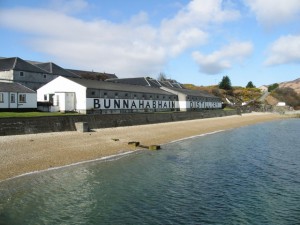 1881: Bunnahabhain is founded as joint venture between William Robertson, owner of the Glasgow-based whisky blender and broker Robertson & Baxter, and the brothers William and James Greenless, owners of Islay Distillers Company Limited. Due to its remote location, the village of Bunnahabhain is founded to house the workers. Bunnahabhain {BONNA-ha-ven} is Gaelic for ‘mouth of the river’ and refers to the Margadale River.

1883: The distillery starts with the production.

1999: Erdington acquires Higland Distillers. Bunnahabhain gets mothballed but is allowed to produce for a few weeks each year.

Nowadays Bunnahabhain is widely known for its rather Islay untypical unpeated single malts. However, that was not always the case. The distillery produced a heavily peated whisky until 1963 when production was altered in order to supply a lightly peated spirit for the Cutty Sark blend. Since the takeover in 2003, Bunnahabhain produces small quantities of peated whisky mainly for the owner’s Black Bottle blend.