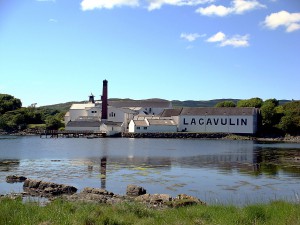 1742: At that time there are about ten different illicit stills located on Lagavulin Bay, a small cove on the South coast of Islay. Lagavulin {lagga-VOO-linn} is Gaelic for ‘the hollow where the mill is’.

1816: John Johnston founds the first legal distillery in the bay. In the following year, the Ardmore distillery (not affiliated with the identically named distillery in Kennethmont) is founded in the immediate neighborhood by Archibald Campbell. Only four years later, Campbell closes his distillery.

1825: Johnston takes over the nearby distillery and resumes its production. Ardmore is closed permanently in 1835.

1837: Donald Johnston takes over both distilleries and merges  them under the name Lagavulin.

1878: Peter Mackie, the nephew of James Logan Mackie, takes on the management. He inherits the distillery after his uncle died in 1889. One year later, J. L. Mackie & Co. is renamed Mackie & Co. At the same time, the ‘White Horse Blend’ (Lagavulin is the leading malt) is introduced for the export market. In Great Britain the blend is distributed not until 1901. In 1908 Peter Mackie builds an additional distillery on the site of Lagavulin: Malt Mill.

1974: The malting floors are disused. The malt needed for the production comes now from the Port Ellen distillery.

1988: Lagavulin 16 Year Old becomes part of the ‘Classic Malts of Scotland’ series from United Distillers (Diageo since 2002). A Distiller’s Edition with a Pedro Ximenez finish is first released in 1998.

Lagavulin has only very few distillery bottlings and for a very long time the 16 Year Old was the only one. Since 2010 there is also 12 Year Old bottled at cask strength on the market. It is very rare that independent bottlers are able to purchase casks from the distillery. However in that case they are not allowed to use the name Lagavulin because that right is reserved for the distillery only.