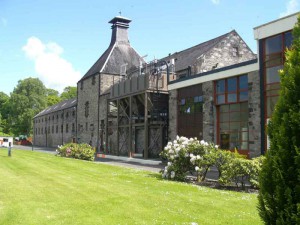 1896: John and Tommy Dewar build the Aberfeldy distillery on the former site of the Pitilie distillery (1825 – 1867), located on the eastern outskirts of Aberfeldy. The goal of the brothers is to produce a single malt for their blend White Label.

1898: The distillery starts up production.

1917: Barley supplies are rationed due to World War I, thus the Aberfeldy distillery closes until 1919.

1942: Barley supplies are rationed again, this time due to World War II, and the distillery closes until 1944.

1972: The distillery gets enlarged. Malting floors are closed and the two old stills are replaced by four new steam heated stills.

1991: The first official distillery bottling is released, a 15 Year Old in the Flora & Fauna series.

1998: In an effort to diversify its business, the rum giant Bacardi buys John Dewar & Sons from Diageo for £1,15 million. Five malt distilleries and Bombay Sapphire Gin are included in the takeover price.

2000: The visitor center, called “Dewar’s World of Whisky”, is opened. The name  is no coincidence: Aberfeldy is the leading malt of Dewar’s Blended Whisky.

2014: The visitor center is extensively refurbished and the whole range gets a revamp.

The majority of the production goes into Dewar’s White Label blend, hence Aberfeldy is marketed as “the spiritual home of Dewar’s whisky”.