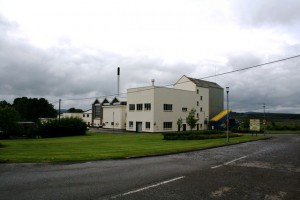 1896: Alexander Edward, who also inherit Benrinnes from his father in same year and co-founded Craigellachie in 1891, founds Aultmore. Productions starts a year later. Aultmore {olt-MORE} is Gaelic for ‘the big burn’ and refers to the water source of the distillery, the Auchinderran burn.

1898: Edwards founds Oban and the Oban & Aultmore Glenlivet Distilleries Limited takes over the management of Aultmore. The distillery is expanded and production is doubled.

1914: Barley shortages, caused by World War I, forces the distillery to close again. Aultmore reopens shortly after the war.

1925: Dewar’s in turn is taken over by Distillers Company Limited (DCL).

1943: Another barley shortage, this time due to World War II, forces the distillery to close yet again. Aultmore is reopened after the war again.

1971: The entire distillery is rebuilt and expanded, including the installment of two more stills, bringing the total to four.

1998: In an effort to diversify its business, the rum giant Bacardi buys John Dewar & Sons from Diageo for £1,15 million. Five malt distilleries and Bombay Sapphire Gin are included in the takeover price.

2004: A 12 Years Old Aultmore as the new official bottling is released.