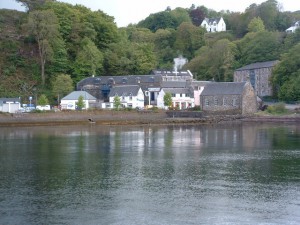 1788: The British Fisheries Society builds a fishing harbor called Tobermory on the north coast of the Isle of Mull.

1797: John Sinclair, a local kelp dealer, rents 57 acres of ground south of the port in order to build some houses as well as a distillery. However at that time distilling alcohol is prohibited by law because Great Britain is at war with France (War of the First Coalition, 1792 – 1797) and therefore grain supplies are rationed. Thus Sinclair is only granted to build a beer brewery. But he sticks to his original plan and is able to open his distillery only one year later in 1798.

1837: The distillery is closed and is not put back into operation until 1878.

1972: The French sherry producer Domecq and a shipping company from Liverpool buy the mothballed distillery. Under the new ownership the equipment is extensively modernized and two more stills are installed, bringing the total to four. After the refurbishment the distillery is named Ledaig Distillery Limited. Despite these measures, the distillery runs into financial difficulties and has to file for bankruptcy in 1975.

1979: The real estate broker Kirkleavington Property buys the distillery and forms a new company, Tobermory Distillers Limited. Only three years later, in 1982, production comes to a halt again. The warehouses are converted into flats and a dairy company uses parts of the site for its cheese storage. Production resumes in 1989.

2002: The venture capital company CL Financial, based in Trinidad and Tobago, buys Burn Stewart Distillers for $50 millions. CL Financial is until its financial breakdown in 2009 the largest privately held conglomerate in Trinidad and Tobago and one of the largest privately owned concerns in the entire Caribbean – the former insurance company comprises 65 holdings in 32 countries worldwide with total assets in excess of $100 billion.

2013: CL Financial is still in financial troubles and has to sell Burn Stewart to Distell Group Limited.

The whisky from Tobermory is stored in the warehouses of Deanston (together with Bunnahabhain also part of Burn Stewart) because the distillery has no own warehouses anymore.