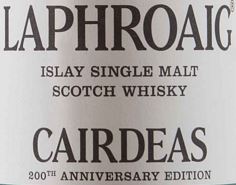 The 2015 bottling is produced from of our finest floor malting’s malt, distilled using only the smaller stills and fully matured in our famous No1 warehouse, right by the sea. Cairdeas 2015 is therefore John’s [Master Distiller John Campbell] interpretation of how Laphroaig would have been produced at the distillery 200 years ago. 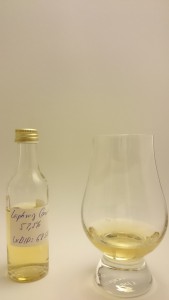 Barbecuing at the beach – very salty sea air mixed with campfire smoke. Not much medicine and iodine. Hints of vanilla honey and caramel toffee. All kinds of citrus fruits like lemons, limes and oranges. Mint leaves. Backed apples wrapped in bacon.

Creamy and full-bodied. Again very salty. Sweet ashes. Hints of rose pepper and herbs. Vanilla, chocolate and citrus fruits. Gets pretty flat after a short while.

A very good Laphroaig, although a bit too progressive for my taste. The nose is a real highlight and while the rest is more than just fine, it is just not as good.