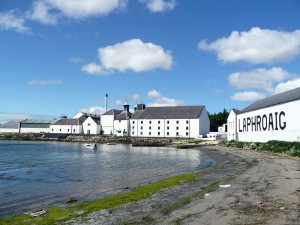 1815: Since it is more profitable to distill whisky, the cattle rancher Donald and Alexander Johnston found the Laphroaig distillery in the south of Islay. Laphroaig {la-FROY’g} is Gaelic for “the beautiful hollow by the broad bay”.

1836: Donald buys out his brother. Alexander gets £350 for his share of Laphroaig. Later he immigrates to Australia and lives there until his death in 1881.

1847: Donald falls into a vat and drowns. His only heir, his son Dugland, is just 11 years old and thus too young to take over. Therefore his uncle John Johnston and a local farmer Peter McIntyre take care of Laphroaig.

1857: Dugald Johnston is finally old enough to run the distillery himself but is supported by his cousin Alexander Johnston.

1877: Dugald passes away. His sister Isabella, who is married to their cousin Alexander, inherits the distillery.

1908: Ian Hunters arrives in Islay to help his mother and aunt with the distillery.

1954: Ian Hunter passes away childless and his former PA and secretary, Elisabeth “Bessie” Williamson, takes over as Director of the Board and Managing Director.

1967: Bessie Williamson sells Laphroaig to Seager Evans & Company, who already acquired a part of the distillery in 1962. However Bessie remains in office. An additional still is installed bringing the total to five.

1972: Bessie Williamson retires. The number of stills is increased to seven.

1994: HRH Prince Charles, who is also “Lord of Isles”, visits the distillery and gives his Royal Warrant to Laphroaig. In the same year the Friends of Laphroaig (FoL) club is founded. Every club member receives a lifetime lease of his very own square foot of land on Islay and is able to claim his “rent” each year – a dram of Laphroaig.

2005: Pernod Ricards takes over Allied Domecq. In order to obtain regulatory approval for the takeover, Pernod Ricard sells Laphroaig to Beam Global Spirits, a subsidiary of Fortune Brands. In 2011 Fortune Brands transfers its spirits business to the newly founded Beam Inc. Beam is purchased by Suntory in April 2014.

There has been another distillery situated on the same site as Laphroaig between 1837 and 1868: Ardenistiel, founded by Andrew and James Gairdner. Their distillery was also known as Kildalton distillery (1849 – 1852) and Islay distillery (1852 – 1866). The two distillers also shared the same source of water, the Sanaig Burn.

The majority of the casks for the maturation comes from the Maker’s Mark distillery in Kentucky.