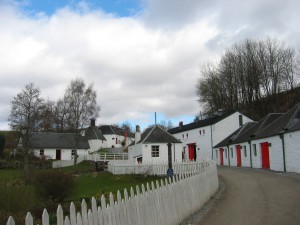 1825: Glenforres is founded as a farmers co-operative.

1837: Edradour {edra-DOWER}, Gaelic for “the land between two rivers”, is mentioned for the first time.

1841: The farmers form a company called John McGlashan and Co.

1853: James Reid, a local farmer, takes over the distillery and forms James Reid and Company.

1884: John McIntosh buys Edradour. His father, William McIntosh, was one of the original founders.

1911: The wine and spirits merchant John Stewart becomes a partner.

1933: William Whiteley & Co. acquires Edradour. The whisky produced by the distillery had been used in Whiteley’s blends ‘House of Lords’ and ‘King’s Ransom’ already before the acquisition.

1976: Haim dies and the distillery is sold to an American-Australian consortium.

1982: Edradour is sold to Campbell Distillers, a subsidiary of Pernod Ricard.

1986: Edradour 10 Years Old is released. However most of the production is still used for the ‘House of Lords’ and ‘Clan Campbell’ blends while ‘Kings Ransom’ is discontinued in the same year.

2002: Andrew Symington, owner of the independent bottler Signatory Vintage, fulfills his long-awaited goal to own a distillery and buys Edradour from Pernod Ricard for £ 5.4 million.

2007: Signatory Vintage moves to the site of the distillery. A new bottling facility is opened in the same year.

2010: A new Dunnage Warehouse is complete in order to mature all casks on-site.

Edradour has been for a long time the smallest distillery in Scotland, producing in a year what other distilleries are producing in a week. However Edradour has more than 100,000 visitors per year which means that they employee more tour guides than actual production workers.