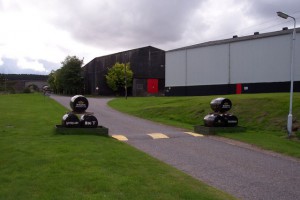 1897: The Inverness-based Tomatin Spey Distillery Company founds the distillery. However whisky production (albeit illegal) on the site can be presumably traced back to the 15th century, when droves bought their whisky from a still at the Old Laird’s House (still standing on the site). Tomatin {tom-AH-tin} is Gaelic for “hill of the juniper bushes” and could be understood as a direct reference to the illicit past as juniper wood gives off no smoke while burning and was therefore the fuel of choice for illicit distillers. Another possible explanation is that the name is just a reference to the location of the distillery, the Monadhliath Mountains, making it one of the highest distilleries in Scotland.

1906: The distillery goes bankrupt and thus the production comes to an end.

1909: The Tomatin Distillers Co. Ltd. takes over and restarts production.

1956: Two more stills are installed, bringing the total to four.

1961: The number of stills is increased from six to ten.

1974: There are now 23 stills. Malting floors are closed. Tomatin is now the largest distillery in Scotland and one of the few distilleries with a single malt bottling (first a 5 Years Old, later also a 10 Years Old). However most of their production goes into the blend industry (J&B, Chivas Regal and Johnnie Walker).

1985: The demand for blended whisky decreases and Tomatin Distillers Co. Ltd. has to be liquidated.

1986: The drinks producer Takara Shuzo Co. and the trading company Okara & Co., both long-time costumers of the distillery, form Tomatin Distillery Co. and take over. This makes Toamtin the  first fully Japanese owned distillery in Scotland.

1998: Okura & Co, which owns 20%  of the distillery company, is liquidated and Marubeni takes over the shares.

The vast majority of the production goes into blended whisky, including the own brands Antiquary and Talisman.

Nowadays the distillery uses only a third of its possible production capacities.

Around 80% of the employees live with their families on the site.