Alright, I already reviewed quite a few bourbons, 10 to be exact, two corn whiskeys and even two single malts, both from Texas and Oregon. The only thing that was missing so far was rye whiskey, but that will change today.

The Redemption Rye is here “to redeem” the dominant position rye whiskey once had among US whiskeys. And sure enough, the first ever produced whiskey on American soil (Pennsylvania) was made out of rye. After that, rye whiskey remained the epitome for US whiskey until Prohibition changed that. Not a single one of the mainly in Pennsylvania and Maryland located rye distilleries survived that period and thus rye whiskey was forgotten by many. Redemption Rye wants to change that.

Anyways, the label says that this rye was “distilled in the Indiana heartland”. There is not such a thing like a “Redemption Distillery” in Indiana, so it is most likely produced by MGP Ingredients. Sounds familiar? Yes, that is the same contract distillery which also produces the Big Ass Bourbon I reviewed two weeks ago. So what we have here is a young, mass produced rye whiskey. What sets it apart from other rye whiskeys is its mash bill which contains 95% rye. 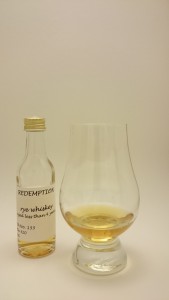 Lots of eucalyptus which is typical for most young rye whiskeys. Beneath all that eucalyptus are hints of cinnamon, herbs and citrus fruits.

Surprisingly smooth given the high rye content but a bit thin. Caramelized apples and cherries. Cinnamon. Gets a bit spicier with time but overall pretty sweet.

Medium and dry. Again only slightly spicy with a very distinctive grass note.