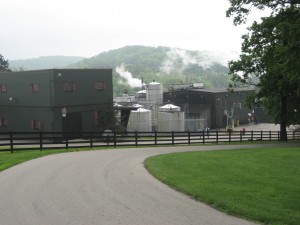 1790: 30-year-old Johannes Jakob Böhm,son of a German immigrant, moves from Maryland to Clermont, Kentucky. After his arriving in Clermont, he builds a watermill and begins to distill surplus corn into whiskey. He takes on the name Jacob Beam.

1795: Jacob Beam sells his first whiskey under the label ‘Old Jake Beam’. The distillery is known as Old Tub.

1820: David Beam takes over the distillery from his father.

1850: David hands over the distillery to his son David M. Beam. The distillery is relocated to Nelson Country to capitalize on the growing network of railroad lines.

1919: Prohibition begins and the distillery is closed.

1947: Jim Beam’s son T. Jeremias Beam is appointed as the president of  the ‘James B. Beam Distilling Company’.

1950: Frederick Booker Noe II (or just Booker Noe), the grand-grand-grandson of Jacob Beam, joins the family business at the age of 21.

1954: A second distillery near Boston, Kentucky is build in order to cope with the rising demand.

1960: Booker Noe is appointed as the ‘Master Distiller’.