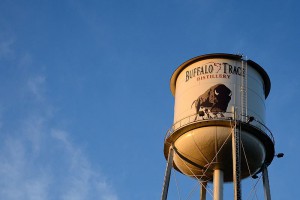 1812: Harrison Blanton constructs a small distillery in Lees Town (nowadays a part of Frankfort). According to some records, the first to distill on site were the founder of the town, Hancock Lee, and his brother Willis Lee, back in 1775. However, the oldest building on the site, a one-story stone house called “Riverside”, dates back to 1792 and was built by Commodore Richard Taylor. The house is still standing to the present day on the site.

1838: Jacob and Philip Swigert buy the property of $600. In the following decades, the distillery property is enlarged by land acquisitions.

1857: Daniel Swigert converts the warehouse into a modern distillery.

1870: Colonel Edmund Haynes Taylor Jr. purchases the distillery and gives it its first name: “O.F.C” – Old Fire Cooper, a reference to the belief that the finest whiskey is produced in old-fashioned wood-fired copper stills.

1881: Warehouse A is build. Warehouse B is build in 1884 and finally Warehouse C in 1885. All buildings are still standing to the present day on the site.

1882: A flash strikes into the distillery and burns it down in what is known till today as the “Great Fire”. The distillery is rebuild far bigger than before the fire.

1885: A steam heating system for the warehouses is installed, making them the fist climate controlled warehouses in the USA.

1897: The 16 years old Albert B. Blanton joins the company as an office help. Only three years later, he is appointed as still house, warehouse and bottling manager.

1904: The distillery is renamed George T. Stagg Distillery. The Old Stagg brand is introduced in the following year.

1920: Prohibition begins and the distillery is one of the few to receive a licence to produce whiskey for “medicinal purposes”.

1933: Prohibition ends and the George T. Stagg distillery is one of only six distilleries still in business.

1937: The distillery is flooded by a massive flood.

1952: The distillery produces the 2 millionth barrel since Prohibition and in order to celebrate this special occasion, Warehouse “V” is built. It is the smallest warehouse in the world, just licensed to hold a single barrel. Each following millionth barrel is stored in this special warehouse. In the very same year, Albert B. Blanton retires after working 55 years for the distillery. He dies in 1959.

1991: The distillery is in very serious financial problems and is on the verge of closing down. Only 50 people are employed at this time (for comparison: the staff consisted of 1,000 people back in 1939).

1992: Takara Shuzo buys Age International as well as the distillery but immediately resales the distillery to the New Orleans-based Sazarec Company. However, he retains the branding rights for Blanton’s, Elmer T. Lee, Rock Hill Farms and Hancock’s President Reserve. All those brands are made from the so-called “Buffalo Trace rye bourbon mashbill no. 2″ (lower corn, higher rye). The brands owned by Sazerac, Eagle Rare, Stagg, Old Charter, Benchmark and Colonel E. H. Taylor, are made of the so-called “Buffalo Trace rye bourbon mashbill no. 1″ (higher corn, lower rye). The Sazarec Company, owned by the Goldring family,  has a long business relationship with the distillery, dating back all the way back to 1850 when it started to purchase rye whiskey from the distillery for their cocktails .

1999: The distillery is refurbished and afterwards renamed as Buffalo Trace Distillery. This also marks the launch of the new flagship bottling: Buffalo Trace. In the same year, the W. L. Weller and Old Charter brands are acquired.

2009: Buffalo Trace buys the E. H. Taylor brand along with the barrel storage from Jim Beam.

2013: The Buffalo Trace Distillery is appointed as a National Historic Landmark.