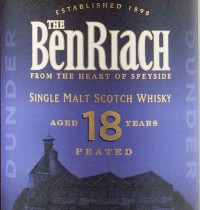 Yet another new release from BenRiach. Not long ago, they introduced the BenRiach 18 Years Old Albarzia as part of their new ‘heavily peated range’. The even more strictly limited BenRiach Dunder 18 Years Old is the newest addition to this range. It was first matured in American Oak casks followed by a finish in Dark Rum barrels.

‘Dunder’ is the liquid left in a still after the distillation of a rum batch. It is the traditional yeast source in the fermentation process of Jamaica Rum. 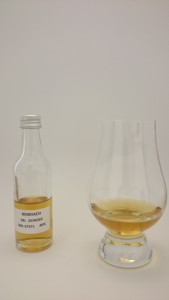 Gentle and aromatic campfire smoke, far away from being ‘heavily peated’. Very sweet aromas of grilled bananas with rum-molasses glaze. Hints of burned candy floss and vanilla. Overall, a fine balance between the smoke and the rum influences.

A bit weaker than expected. Caramelized fruits and burned sugar cane. The campfire smoke gets stronger with time. The rum is spicier now, almost peppery. Fresh ginger. Hints of bananas.  Drying towards the end.

Rum and smoke complement each other well, although I would have preferred a stronger rum influence.