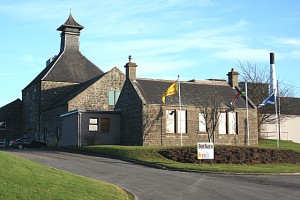 1898: John Duff builds two distilleries at once: Longmorn and BenRiach. BenRiach {ben-REE-ach} is Gaelic for the ‘hill of the red deer’. But the so-called ‘Pattison Crash’ shocks the whole Scottish whisky industry in the very same year. The bankruptcy of the Pattison Limited is disastrous for the whole branch. Several distilleries (and even more suppliers) have serious financial problems after the bubble bursts. As a result quite a few distilleries have to be mothballed or shut down entirely. BenRiach is also affected and is mothballed in 1900 only two years after its opening. Only the floor maltings are still producing to supply the sister distillery Longmorn.

1965: The Glenlivet Distillers Limited takes over and reopens BenRiach after 65 years. Most of the distillery is rebuilt by the new owners while parts of the original complex remains mothballed or is completely dismantled.

1978: The then spirits giant Seagrams acquires the Glenlivet Distillers Limited together with its distilleries. At that time prices for peated whisky continue to rise but Seagrams needs peated whiskies for its Blends and is not in control of an Islay distillery. Thus Seagrams decides in 1983 to produce their own peated whisky at the BenRiach distillery. By the standards of the time a very unusual decision for a distillery in the Speyside.

1985: The amount of still is doubled from two to four to supply the steadily rising demand.

1999: The malting floors are closed after over 100 years of continuous production. However the malting floors are in a very good condition until today and could continue production almost immediately. The current owner Benriach Distillery Company (see below for more information) has a respective plan since 2012 but it is not realized as of this writing (Spring 2015).

2001: Pernod Ricard takes over Seagrams. The french concern now commands over a noticeable portfolio of distilleries. Glenlivet, Aberlour, Glen Grant and Longmorn remain production with full capacity. Glen Keith (mothballed since 1999) remains closed. Edradour (the smallest producing distillery in Scotland) is sold to the independent bottler Signatory. BenRiach, Allt a’Bhainne, Breaval and Caperdonich are each only producing for three months of every year until they are mothballed in 2002.

2008: The BenRiach Distillery Company buys GlenDronach and in 2013 the Glenglassaugh distillery.