After the Highland Park 1995 from Tuesday, why not stay a bit longer on Orkney and have a look at the other (although way less popular) local distillery: Scapa.

The Scapa 2001 was distilled at a time when the distillery was run by the staff from Highland Park, albeit only a few weeks per year. Funny enough, there has been available an official 14 year old between 2004 and 2008, which was then replaced by a 16 year old, which is in turn now replaced by a new 14 year old. 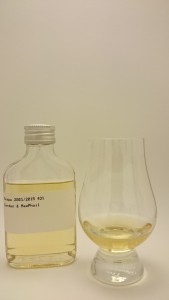 Rather light and fruity. Green apples and green pears. Honeydew. Vanilla toffee. Developing hints of cold coal smoke in the back.

Creamy and sweet. Tropical fruits followed by pink grapefruits. Then some chili pepper kicks in. A trace of ash.

Pleasant and easy to sip. A nice mix of sweetness, fruitiness and chili spiciness on the palate.