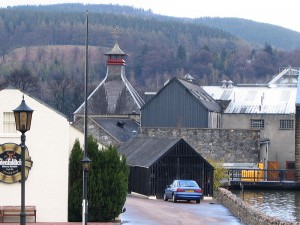 1886: William Grant (a former employee of Mortlach) fulfills his life’s dream by building his own distillery with the help of his family (Grant has seven sons and two daughters). The new distillery is named Glenfiddich {glen-FID-ich} which is Gaelic for “valley of the deer”. Grant buys the stills and other parts of the equipment from the old Cardow distillery (now Cardhu). Only one year later he is able to distill his first whisky on Christmas Eve 1887.

1909: Glenfiddich is one of the first Scottish distilleries to market its whisky worldwide. In 1914 Glenfiddich is represented in 30 countries already.

1923: Grant Gordon, a grandson of William Grant, takes charge of Glenfiddich. One of his first acts is to increase the production in spite of Prohibition. By the end of Prohibition in 1933 Glenfiddich is one of only six distilleries still operating in Scoland (another one is Balvenie). Thanks to its well-stocked warehouses the distillery is able to meet the rapidly rising demand for scotch whisky.

1957: A coppersmith is built to manufacture and to service stills on-site. Two years later a cooperage is built as well. Also in 1957 the German-British designer Hans Schleger creates the iconic triangular bottle for Glenfiddich. Every corner of the bottle stands for one of the needed ingredients : water, air and barley malt.

1958: The malting floors are decommissioned.

1963: Glenfiddich becomes the very first Scottish distillery to market its whisky worldwide as single malt in order to survive the ongoing cutthroat competition in the Scottish whisky industry (a great number of smaller distilleries have to close or are bought). Later William Grant & Sons are one of the first to wrap their bottles in tubes and gift wrappers. They also recognize the importance of duty free shops for spirits very early. Following this strategy, Glenfiddich is the very first distillery in Scotland that opens a visitor center in 1969.

Glenfiddich is one the last Scottish distilleries still family-owned, now in the fifth generation.

Glenfiddich’s 28 still are some of the smallest in Scotland.

Nowadays Glenfiddich is represented in 180 countries and sells the most single malt worldwide.