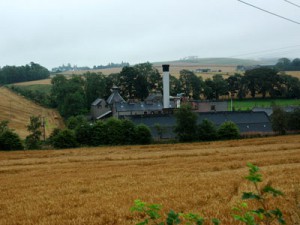 1826: James Allardes (too often referred as Allardice) founds the distillery in a converted meal mill. Other sources credit a consortium of farmers and businessmen for the foundation with Allardes being a part of the consortium. One way or another, Glendronach is one of the first licensed distilleries in Scotland under the Excise Act of 1823. Glendronach {glen-DRON-ach} is Gaelic for ‘Valley of the Brambles’.

1837: A devastating fire destroys most of the distillery.

1887: Scott dies and a consortium from Leith takes over the distillery.

1966: The amount of stills is increased from two to four.

1996: Glendronach is mothballed and the malting floors are ceased.

2002: The distillery reopens and resumes production on 14th May.

2005: Glendronach is the last Scottish distillery to heat the stills by coal fire. In September, this traditional process is replaced by indirect heating, using steam coils. On the same year Chivas Brothers (Pernod Ricard) acquires Allied Domecq and is therefore the new owner of the distillery.

2008: Pernod Ricard sells the distillery to the owners of BenRiach.

2009: The whole range is relaunched and the visitor center is rebuilt, too.