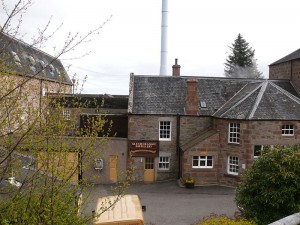 1843: The Matheson brothers found the distillery on the site of a former beer brewery in Tain. Glenmorangie {glen-MOR-angie} is Gaelic for “Glen of Tranquility”. According to reports whisky is already distilled (illegally) in the area around Tain by 1700.

1883: The distillery is only a few decades after its foundation in a very bad condition despite the early international success of Glenmoranige in the 1880s. Therefore it is rebuilt. Afterwards the Matheson brother form the Glenmorangie Distillery Company Limited in 1887.

1918: Glenmorangie has economic problems after World War I and the Matheson family has to sell 40% of the distillery to the whisky dealer Durham and the other 60% to the largest costumer of the company, Macdonald & Muir. Macdonald & Muir takes over the remaining shares from Durham in 1930.

1920: Glenmorangie takes over the Glen Moray distillery in the Speyside.

1931: Glenmorangie closes because of Prohibition and the effects of the Great Depression. Glenmorangie reopens in 1936 but closes again in 1941 due to World War II. The distillery is reopened in 1948.

1980: Two additional stills are installed bringing the total of stills to four. The malting floors are closed. However the distillery makes sure to purchase as much malt as possible from local farmers to the present day. The purchased malt may only be lightly peated.

1990: The number of stills is doubled to eight.

1997: Glenmorangie takes over the financial troubled Ardbeg distillery and saves it from closing.

2004: A very eventful year for Glenmorangie. First the distillery takes over the 27,000 member strong Scotch Malt Whisky Society. In the October of the same year the Macdonald family decides to give up the whisky business after 161 years.  The French luxury company Moët Hennessy Louis Vuitton (LVMH) buys  Glenmorangie PLC (including Glenmorangie, Ardbeg and Glen Moray) for £300 million. LVMH sells Glen Moray in 2008 to the French wine and spirit company La Martiniquaisse because the distillery does not fit into their the luxury goods portfolio.

2007: The complete Glenmorangie range gets a relaunch. The new emblem of the distillery is inspired by the Campbell Stone, a protohistoric menhir. A copy of this menhir is placed on the site of Glenmorangie.

2008: The production capacity is increased again. The distillery has now twelve stills.

2009: The first bottling from the annual, limited “Private Edition” series is released.

2013: For the first time Glenmorangie organizes a crowdsourcing project under the name “Cask Masters“. The participants can influence aspects of the whisky creation via online voting – the finish, the name of the bottling and the label design among other aspects. The so created bottling with the name Taghta (Gaelic for “Chosen”) is released in Autumn 2014.

Glenmorangies stills are extraordinary high. They have a height of 5.14 meters and are the highest stills in Scotland. They produce a very mild whisky. Therefore it is perhaps no surprise that the Glenmoranige Original is the most sold Single Malt Scotch Whisky in Scotland.

A principle of the distillery is that Glenmorangie has to employ always 16 workers, the so called ’16 Men of Tain’. Since the distillery has way more employees nowadays this measures only applies to the amount of employees working in the production. Today one of the ’16 Men’ is a woman.